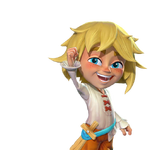 Finn is an aspiring pirate whose character is unlocked at level 3.

After running away from home, Finn was shipwrecked on Paradise Bay, where he met Keani, who is his caretaker. He likes to tell wild stories about his adventures (such as fighting a kraken) and go on the hunt for treasure, though Keani wishes he would spend more time cleaning his room.
When Finn's completed Trade Post orders and relationship level-ups are sufficient, his area upgrades with a mini pirate ship with a cannon that shoots a cannonball and rainbow confetti.

Finn is a young boy who dreams (and dresses) like a pirate. He wears a thin white buccaneer shirt that is half tucked in to his orange pants. Around his waist is a makeshift blue belt, which holds a wooden sword. Finn does not wear any shoes.