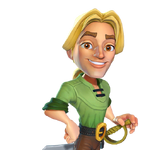 Wesley is a Pirate Captain whose character is unlocked at Level 6.

Wesley claims that he was accidentally left behind by his crew after falling overboard; Pike believes he was tossed overboard for being a terrible pirate, however. He describes himself as daring, heroic, and handsome, and he has developed an interest in Sita.
Wesley believes that proper piracy means being well-mannered, using words over swords and sending thank-you letters afterwards. He is also quite fond of tea-time and jam biscuits.
While Wesley waits for his ship to return, he minds Los muelles.

Wesley considers himself to be quite attractive. He has long blond hair that is tied in a ponytail, a green shirt, and brown pants. Wesley also carries a sword. Wesley’s physical appearance and occasional mentions of the Pirate Roberts are likely references to the book and film The Princess Bride.